Just as its theory and philosophy is not dependent on any one set of beliefs or traditions, so pastoral care is relating gently and skilfully, with the inner world of individuals from all walks of life, and the elements that go to make up that persons sense of self, their inner resources, resilience and capacity to cope.

The term pastoral ministry relates to shepherds and their role caring for sheep. The term was adopted for metaphorical usage historically first by Christians, although many religions and non-religious traditions contain an emphasis on care and social responsibility. In the West, pastoral ministry has since expanded into pastoral care embracing many different religions and non-religious beliefs.

The Bible does not explicitly define the role of a pastor but associates it with teaching.  Pastoral ministry involves shepherding the flock.

In our parish, we have a small group that looks after our own flock.  We attemp to help those we can - in both practical and spiritual ways.

If you as a church member, need help, or are concerned for the welfore of another member of our parish, contact One of the following: 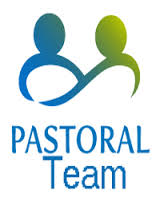